The Reality of Travel

The reality of travel is sometimes very different to what’s written on blogs like this. The highlights are captured in all their glorious details, with the tiredness, squabbles, wrong-turnings and rushing around generally relegated to the archive of the writer’s brain, carving open a space for a less than realistic version of the truth to come through. I’m not saying it’s a bad thing. I mean who really wants to hear warts-and-all tales of pickpockets, days on the toilet and deposit-losing car damage? We’re here to tell stories and stories rarely give the full picture. Star Wars would not have been the same if they’d shown Luke’s slow recovery from severe food poisoning after sampling Yoda’s snake stew on Dagobah. There’s no way Lord of the Rings would have been improved if, at first light on the fifth day, Gandalf had returned triumphantly with the Riders of Rohan only for Shadowfax to stop to take a shit. We’re happy for stories to give us the best bits, the highlights, the legends and miracles whilst keeping the nuts and bolts practicalities to one side.

I have to confess I’m as guilty of it as anyone. I have always had a naturally optimistic slant and want to see the best in every situation. It’s not always intentional. I’m often writing these posts months later and it’s amazing how the bad stuff can fade with only the positive memories left behind.

So when reading back my notes for the Rotunda of Mosta I was surprised by what I saw. My memories of this place were nothing but good, however the reality of how I felt pulling up on a dusty side street on the outskirts of this town in central Malta was clearly very different….

It had been a strength and patience sapping day. We’d spent a longer than expected time exploring what we thought was the small (but turned out to be large!) town of Mdina, walked hundreds of steps up and down the catacombs of St Paul’s and had a good go at removing the front bumper of the car in an attempt to find the fabled Jesus Tree of Malta! I really don’t know what we were thinking when we decided to head toward ‘the big church looking building’ we’d seen from the spectacular view at Il Veduta but here we were! Travelling with me can be a somewhat relentless experience sometimes but today was properly taking the piss.

Mosta was really not doing itself any favours. Admittedly I’d left us a fair distance away from the centre in a decision fuelled by the assumption that “parking will be a nightmare” but the walk was less than enjoyable. The crumbling buildings with their peeling paintwork and parched pot plants gave the feeling of a town abandoned to the elements. Narrow streets, designed long before the introduction of cars, were now full of them, leaving a less than comfortable space between my right elbow and the mother of all funny bone injuries.

The Maltese resident’s deep moral objection to the use of indicators didn’t help matters, making crossing at junction less safe than a quick round of Ro-Sham-Bo with a clog wearing polar bear. To add to my ill-humour, all this was being played out to the tune of Becca pointing out every single car parking space on route that was closer than the one I’d chosen. This, unfortunately, turned out to be a fair few. 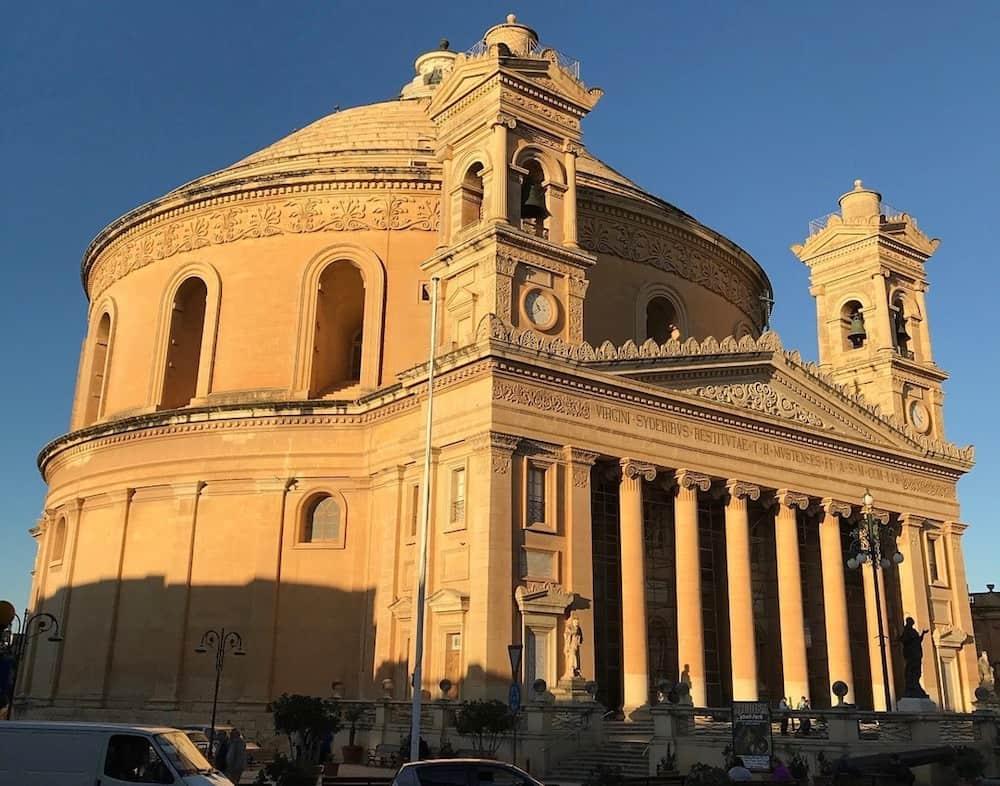 But every good story has a twist, and here is this one. After rounding the corner of yet another block of dusty limestone buildings the Rotunda of Mosta appeared. Appeared sounds dramatic, and it possibly is, but blocky town layouts like this have a habit of hiding things right up until the last minute – and this town was hiding a gem! You know how New Year’s Eve is often a disappointment because you’re expecting something amazing to happen and it rarely does? Travel can sometimes be like that. The iconic landmarks are so well photographed and written about now that sometimes reality does not meet expectation. Well this was the compete opposite of that.

We’d headed over to Mosta on a whim, having only viewed the Rotunda’s massive dome from the hilltop a few miles away. With low expectations and even lower sugar levels the reality caught us completely off guard. This place was simply stunning. In the kind of low evening light that gets a photographer more excited than Lance Armstrong with a ventolin, the Rotunda was glorious to behold. The fading yellow of the sun’s rays bounced back off the limestone creating a spotlit form against the cloudless blue backdrop. The six pillars at the front hold up two towers which seemed to frame the iconic dome in the background. Whilst it was our first time here the Rotunda did look kind of familiar. I didn’t realise at the time this the design was heavily based on the Pantheon in Rome.

The main designer, Giorgio Grognet de Vassé was a Maltese architect had originally planned on becoming a priest. He studied at Frascati near Rome in the late 1700s but eventually had a change of career path. When the small church in the town of Mosta became too small for its growing population Vassé was brought in to design a replacement. Inspired by his trips to Rome a building based on the Pantheon was proposed and work began in 1833. The Rotunda took 28 years to complete. When it was done Vassé received a pension of £100 a year from the Governor of Malta but only lived another few months until his death in 1862. He is buried in the chapel of the Virgin of the Girdle at the Rotunda of Mosta, so pop in and thank him for a job well done whilst you are there. 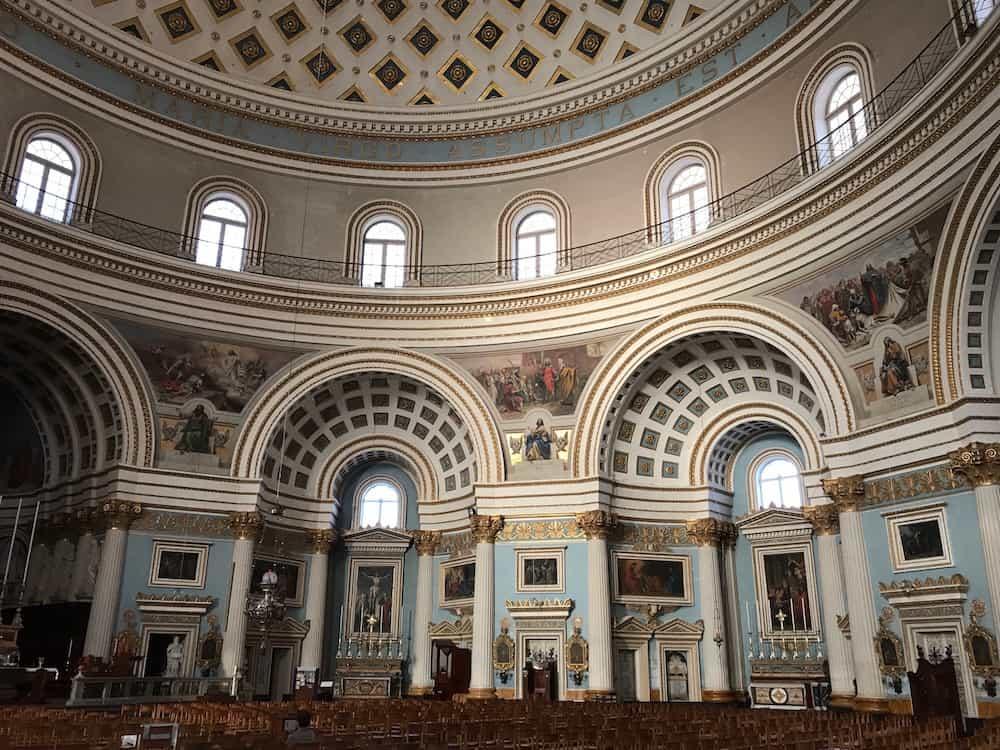 Inside the Rotunda is simply breathtaking. In some ways it does not feel like a place of worship – more an outlandish theatre or music hall – but in others it ticks all the boxes of a traditional Catholic Church. It has all the usual requirements: an altar, lots of dramatic Jesus-centric paintings and crosses everywhere, but this is mixed in with the unusual spherical shape, baby blue walls and grooved pillars. It’s an atypical but not unpleasing blend that has the dual benefit of looking great from a distance but even better up close. 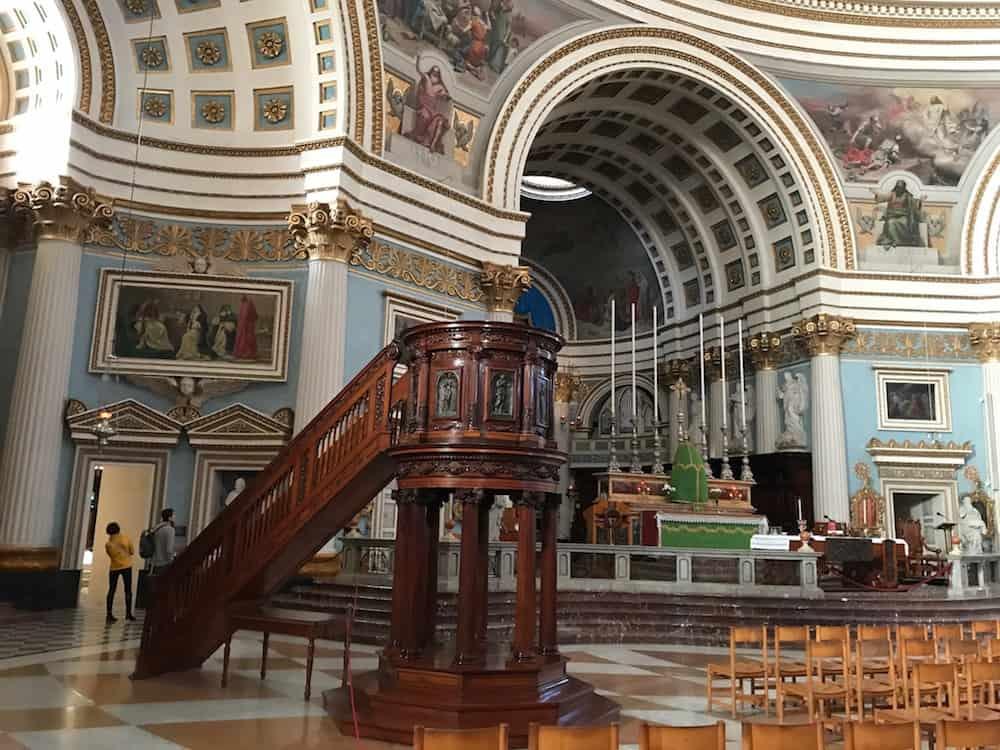 To the side of the main space was an exquisite mahogany pulpit. Standing a good 12 foot high, with a staircase as long as you’d find in most semi-detached houses, it creates a striking ligneous counterpoint to the limestone, concrete and marble. 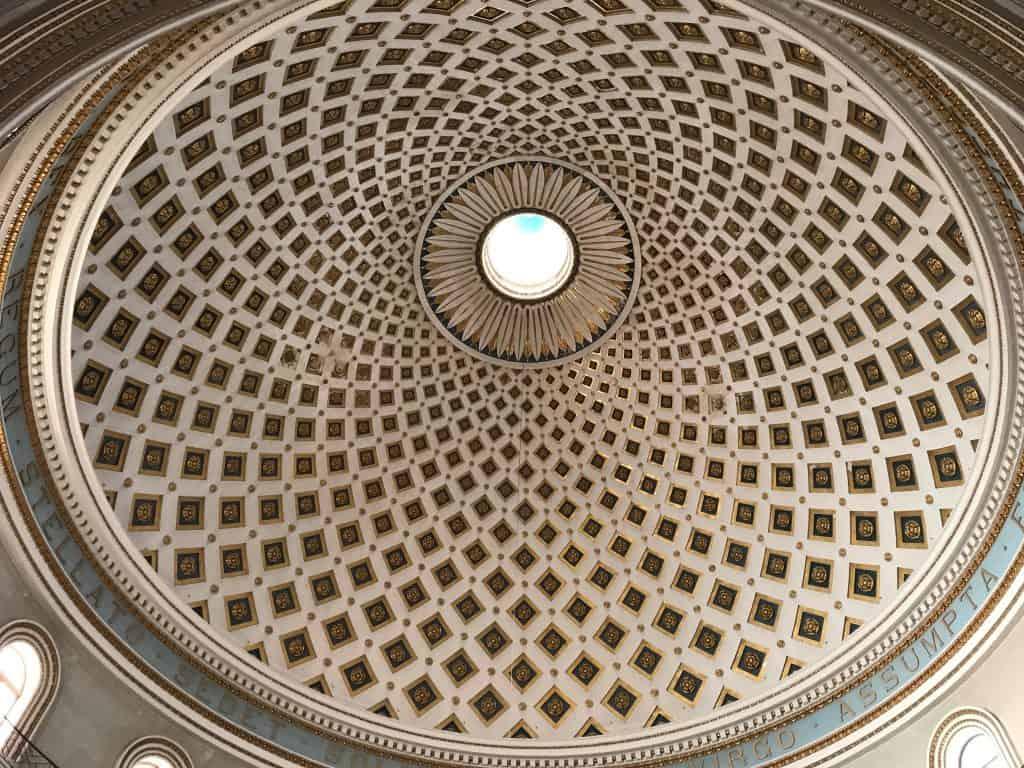 Without question the standout feature of the Rotunda of Mosta is its 37.2 metre unsupported limestone dome. Rimmed with the baby blue and gold seen elsewhere in the church, it draws your eye up towards a small window on the heavens at the top. The concentric, elaborately decorated diamond shapes gradually reduce in size, creating an optical illusion that leads the brain to see all kinds of patterns and sweeps within the design. It is quoted as being the third largest unsupported dome in the world, however there doesn’t seem to be a comprehensive list anywhere that I can find.

On doing some research I would suggest it is the fourth largest in the world:

You will also note it is the largest in the world outside of Italy.

It is simple a staggering sight that will quickly lead you to a crick in your neck and slight dizziness! There are some spectacular churches in Malta but nothing with a dome as beautiful as this, the journey over here is justified just to see it. 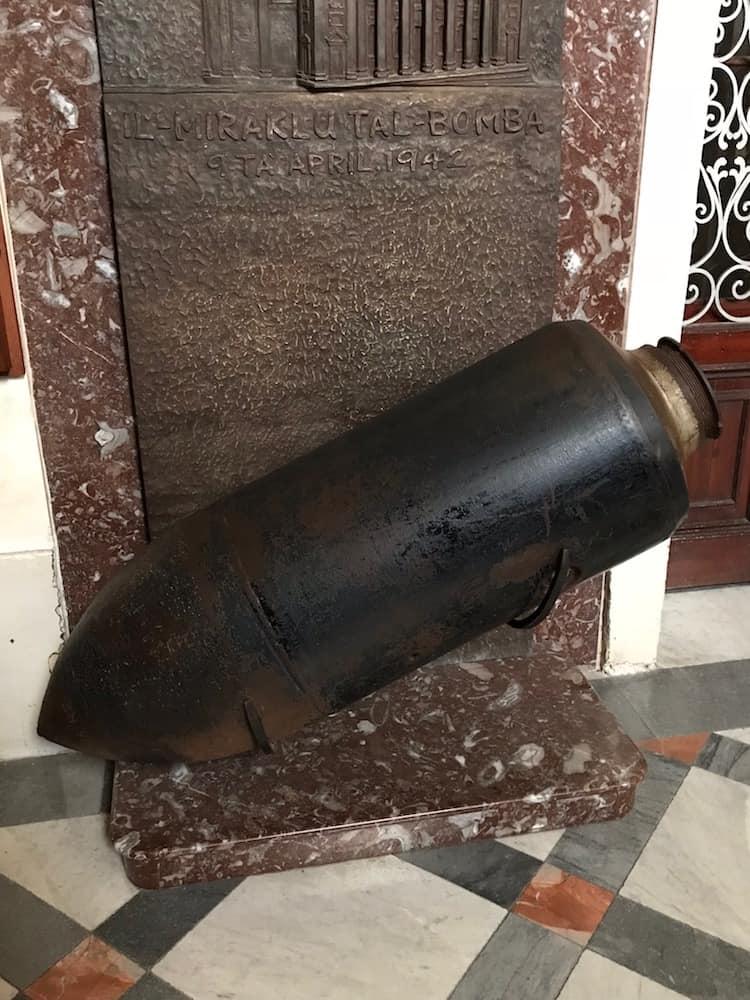 The big surprise at the Rotunda of Mosta is hidden in a little room to the left of the main altar.

On Thursday 9th April 1942, 300 of Mosta’s parishioners were gathered together for their daily hour of prayers. At around 1640 a 500lb German bomb pierced the dome, clattered into the stone floor and rolled amongst the congregation. It didn’t explode and on-one was hurt. A Royal Engineers bomb disposal unit was quickly rallied who defused the device and disposed it in the sea off of Malta’s west coast.

Unsurprisingly the residents of Mosta interpreted this as a miracle and a similar bomb is now displayed in a room at the back of the church under the phrase “Il-Miraklu tal-Bomba, 9 ta’ April 1942″ meaning “The Bomb Miracle, 9 April 1942”.

How to Get Here

Mosta is about half an hour from the capital city of Valletta, and 25 minutes from Malta International Airport.

Ben is the blogger behind TheSabbaticalGuide.com, a site designed to give people the information, tools and inspiration they need to make their sabbatical dreams a reality. He caught the bug for travel at an early age when his dad moved out to South Africa, and now builds regular ‘mini-retirements’ into his career, in which he sees the world with his wife Becca.
Subscribe
1 Comment
Oldest
Newest Most Voted
Inline Feedbacks
View all comments